Does this beast ever end?

St. John in the US Virgin islands is covered in hiking trails. One of the most famous and the longest is the Reef Bay Trail. At 2.2 miles long with another .44 miles if you want to see the famed St. John Petroglyphs, this trail will test your endurance. Starting high in the mountains off of Centerline Road, the trail takes you through the forest, down the mountain, and spits you out at the Reef Bay Rum Factory ruins which is located on a nice little beach.

Castaway Crystal and myself decided to hike the Reef Bay Trail the last time we were on St. John. Our backpacks were filled with water, sandwiches, cameras and rum. There’s always room for rum right? We jumped in the Jeep and set out for the trail head.

We start out and head down the well maintained trail. Neither one of us were saying a whole lot in the beginning. I think were were just soaking in the wilderness and the joy of exploring a rock we love so much. The trail isn’t super difficult, it’s just a constant down hill one way and all up on the way back with a few steep areas. The part that got me was that is was unrelenting. We were walking, stopping for photos, reading the signs, and trying not to trip and fall off the cliffs. I’m not sure how long it took us to go down, but it was probably close to two hours. A big tree. Were we in Jurassic Park, I wasn’t quite sure. I did know we weren’t in Kansas any more. Along the hike, we ran across a few old ruins. There were a couple old homes and some walls put up to mark property lines back in the day.

As you make your way to about the 3/4 mark of the trail, you’ll run into the spur trail for the Petroglyphs. If you don’t know what the St. John petroglyphs are, they are rock carvings made by the Taino Indians and can date back to as early as 500 AD. They are located at the base of St. John’s largest waterfall. No one really knows what they mean. But the symbol just to the left of the one that looks like a face on the right side of the photo has become the symbol of St. John. You can find it on jewelry, t-shirts, and lots of other STJ swag. I even incorporated it into a tattoo I have on my shoulder. That way I’ll know that the island is always near. After seeing the petroglyphs, we continued to make our way down the Reef Bay Trail. After about 15 minutes you could tell the environment was changing. Water must be getting near!

The tall dense forest started to give way to dense mangroves which where home to thousands of big land crabs. I didn’t get a photo of them, but they were everywhere. So much so that I named it Crab City. Incredibly clever I know.

After Crab City we arrived to the ruins of the old Reef Bay Rum Factory. Unfortunately they are no longer making rum. That’s why we brought our own! 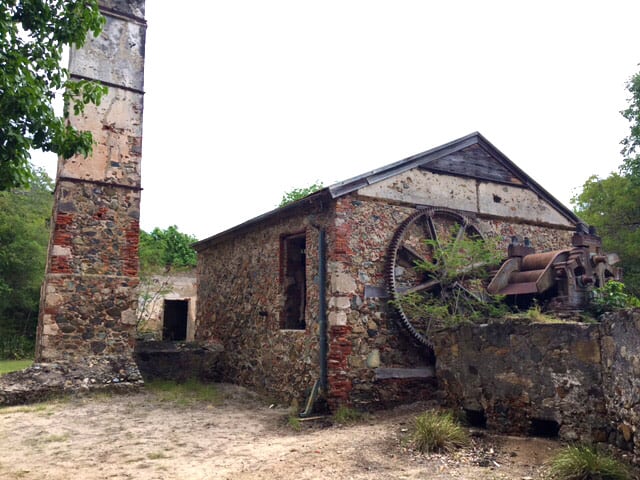 You can see the cane press on the right of the photo. They used that to press the cane juice from the sugar cane stocks. The end at last. I sat there on that uncomfortable rock and soaked in the view. The sweat was rolling down my bald head like it was raining and my legs were telling me to stop moving. So I listened.

We both destroyed our sandwiches and some energy bars right there on that beach. I was tired but I couldn’t have been happier. And being that we are salty pirates, a rum victory shot was in order as a reward for reaching the end of the trail. 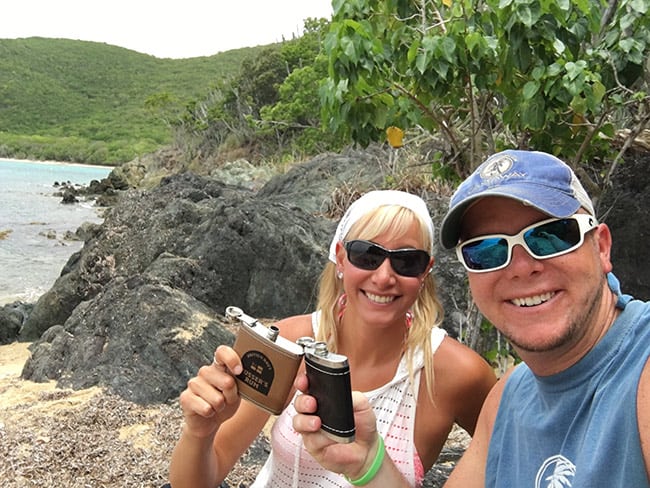 We sat on that beach for about 15 minutes–eating and resting. We had a date with Cinnamon Bay after the hike so it was time to start back up the mountain.

Going up was quicker because we didn’t stop to read signs, take photos, or shoot down the petroglyph trail again. Quicker doesn’t mean easier though. Obviously going up is tougher, but it’s the trails length that beats you up. It’s a constant long up hill endurance climb. Just when you think you are nearing the end, no it’s still a ways to go. Does this beast ever end? We finally made it to the finish line. Our Jeep sat on the street waiting for us, in the back sat a cooler filled to the top with ice cold Carib beer. We both grabbed one and hopped in. (Driving with a beer is legal in the USVI)

Next stop, watching boats sail in and out of Cinnamon Bay. A little salt water therapy was needed.

Have you hiked the Reef Bay Trail? Tell me what you thought!