A guest post by JC Perez, author of Heisting the Beard.

We’ve all heard of the Duval crawl. That famous street in Key West that immediately brings thoughts of rum soaked nights and partying at places like Sloppy Joe’s after a long day at Smather’s beach. Well, we could easily argue that the father of the crawl was Ernest Hemingway, the hard drinking, heavy partying, Noble Prize winning author; Papa himself. Hemingway was drinking hard and partying away the nights well before the crawl ever got its name, and Key West is not the only place he was doing the crawl back to his hotel room after a long raucous night of slinging down rum.

Havana was probably the first, well before Key West became famous for its partying nature. The tight alley type streets of the forbidden isle’s capital, Havana, was the home to the bohemian set, the intellectuals, artists and writers who had a predilection for the taste of rum and its effects on loosening up your inner being and wild side. The stars of yesteryear like Clark Gable, Spencer Tracy, and Hemingway, the father of American literature, all did the crawl in good ole Havana. Maybe we all owe them a bit of gratitude for initiating that great tradition we enjoy today which allows us to let our hair down and enjoy our wild side. What goes on in Vegas stays in Vegas; HELL; what goes on during the crawl stays in the crawl should be the slogan. Let me take you to some places you should crawl through if you’re ever in Havana. I’ll introduce you to Papa’s favorites and few that have come after. Sit back and enjoy, and slam down a few delicious rum drinks in the city that made rum famous.

Let me start with the home of the Mojito, and the home of the Daiquiri, Hemingway’s favorite places in Havana and where he got sloppy and loose before staggering back to his room in the “Hotel Ambos Mundos,” where he wrote two of his classics, “The old man and the sea” and “For whom the bell tolls”, possibly under the influence of our favorite elixir, grog, good old rum.

A must see and a must, “La Bodeguita del Medio,” the home of the Mojito. It’s located in old Havana on Emperada Street and San Ignacio. It’s not the kind of place you want to hang out at all night long, but you do want to have a drink where Hemingway had his and made the Mojito famous, so don’t miss out. When I write anything about Cuba I always like to remind people of where they are, meaning, the revolution. The years of isolation have made it somewhat an eye sore, and Havana has suffered the wrath of years of neglect. But those years haven’t changed the taste of the rum or the nostalgic feel you get while you’re there. La Bodeguita is full of nostalgia with old photos of papa and the famous people of that era all over the walls. The place is small, touristy and always packed, but hell, if it was good enough for Hemingway its good enough for at least one drink and a great place to start your crawl.

Ready for a Havana Mojito? Photo from bar.lv

From there go Hemingway’s next favorite haunt, “La Floridita,” home of the Daiquiri. It’s located on Obispo Street and Montserrat Street, and it has been there since 1817. It’s a far cry from “La Bodeguita.” It’s much bigger, more elegant and very clean. The food is great, but expensive, and like “La Bodeguita” very touristy, but what the hell, have a Daiquiri, they’re great, and then continue your crawl. By then you’ll be a little numb and better able to handle Old Havana and the tight little streets. Remember, you went to Cuba to drink good rum and enjoy the beautiful beaches, not to go sightseeing in a city that has been in seclusion for 52 years, but then maybe you did, whatever, enjoy yourself, the rum, and the crawl, that’s what it’s all about for now. 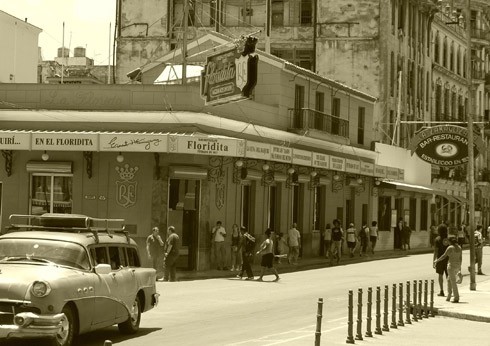 From there go check out the “Taverna la Muralla,” located in an 18th century building at number 368 Ignacio Street. It opened up in 2003 and for you beer lovers it’s the place to go in Havana. It’s owned and operated by Germans so you know the beer is good, and the food isn’t bad either. It’s a bit of a change from the rum, but maybe you want to wash some of that grog down with some good Bavarian brew, or maybe drop a shot of Havana Club in your stein and do some shooters. Whatever rocks your crawl, it’s all about good drinks and enjoying yourself. Before ending your crawl or finding a few places of your own to crawl to in old Havana, check out the “Bar Museo del Ron. A bar called the museum of rum for some of Cuba’s own grog “Habana Club.” It’s located at Avenida Del Puerto down by the bay and enjoy a beautiful view of Havana Harbor and the old Morro Castle on the other side. Just one more thing, before you end your crawl go to “El Gato Tuerto”, the one eyed cat, and listen to some of the world’s finest salsa music played by some of Cuba’s most famous musicians. The place is small and tight but worth the time for the music alone, and hell, while you’re there slam another one down for the road, you’re on a crawl right, so enjoy. After a night of crawling and rum drinking, if you’re not to groggy, (No pun intended) head a few kilometers east of Havana for what has been internationally recognized as one of the finest beaches on the planet, “Varadero Beach”, and if you’re up to it begin another day of the crawl right there.

If you want to know how to get to Cuba check out some other articles I’ve written for my buddy and fellow rummy Ryan. Remember, I’m not condoning anything, just recommending. Enjoy yourselves rummies; don’t hold back, life is too short. Maybe we’ll meet someday at one of rumshop’s tropical getaways, you never know.

To Gin clear water and plenty of rum drinks.